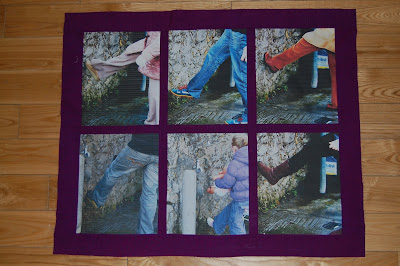 The Western Branch of the Irish Patchwork Society holds an exhibition every two years and the next one opens on 1st May, 2010 at the Galway City Museum. The exhibition is entitled 'West Awake'. I was thinking about this and wanted to do something that celebrates something unique to Galway.
When I first arrived I walked the Salthill promenade with a friend and laughed when she told me I had to kick the wall at Blackrock as 'it's the tradition' I thought she was joking me but then I stood and watched as almost everyone who walked to this point gave the wall a kick and turned around to walk back in the direction they came!
Despite asking many people about it, the only explanation I seem to get is 'it's tradition'! And so, with camera and tripod in-hand I spent a morning at the wall, asking people if I could photograph 'the kick'. Lots of people joked with me on the day and were curious to find out what I was going to do with the photos.
I've printed a number of these onto fabric to make up a wall-hanging and I will stitch into these further and I think I will quilt in some text as well. I hope to finish this in time for the exhibition in May.
Posted by Ester Kiely at 8:22 AM