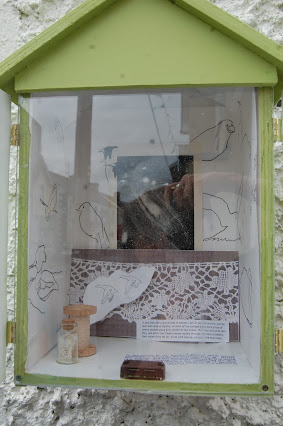 Blown In, art installation created by Selma Makela for The Nesting Lark, a pilot project for
Galway 2020 Small Towns Big Ideas
In 2016 I was asked to assist curator Eilís Nic Dhonncha in coordinating a 4-day cultural event for Headford, Co. Galway to support the Galway bid to become European Capital of Culture 2020. One of the artists who participated was Selma Makela, creating a series of beautiful bird-boxes through the town, each one highlighting a different aspect of the area's cultural heritage. The box shown above, with its reference to Headford as a lacemaking town of some note, fascinated me because of my life-long interest in textiles. Together with Selma and a number of other community members, we embarked on a journey to research, revive and reimagine Headford's lacemaking heritage, that became Headford Lace Project. 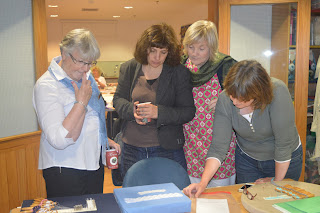 (l to r) Jackie Magnin, Selma Makela, Anne O'Hara Quinn and myself at a Traditional Lacemakers of Ireland lacemaking event in the Museum of Country Life, Castlebar
One of our first tasks was to find someone who would confirm that this was indeed bobbin lace, one of the oldest forms of lacemaking. We reached out to Anne O'Hara Quinn, a Galway-based crochet teacher with links to the Traditional Lacemakers of Ireland, based in Cork. We sent a photograph Selma had researched for her artwork, found in a local history publication and Jackie re-created a sample of this torchon bobbin lace trimming. Selma, Anne and I were very excited to travel to the Museum of Country Life in Castlebar, where we met Jackie for the first time and tried a little hands-on bobbin-lacemaking
ourselves.

A replica, created by Jackie Magnin, of a sample of Headford Lace from 1904. 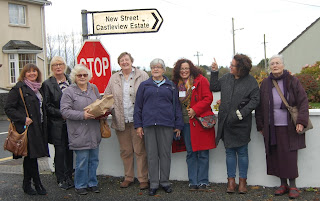 The first group of Headford Lace beginners in September 2016 visiting New Street, where the Lacemakers Cottages built in 1796 still exist today
With Jackie on board to become our bobbin lace tutor, we set about planning a workshop weekend in Headford and had very little trouble finding a group of students willing to learn these skills, which had been forgotten in our community. 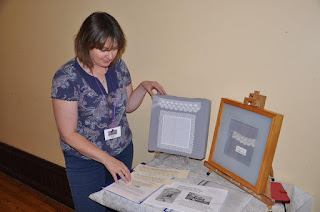 Me, helping to display the only original piece of Headford Lace we know of (owned by Sandra Joyce) as well as Jackie's replica and a Headford Lace trimmed hankie made by Jackie
at our first workshop weekend.
That was the start of a most rewarding journey for us, as we quickly established Headford Lace Project with the aim of researching, reviving and reimagining Headford's lacemaking heritage. The project has grown from a small community funded project, to the award-winning project it is today supported by a number of regional and national agencies. See Headford Lace Project for more information on our activities.
Posted by Ester Kiely at 12:27 AM